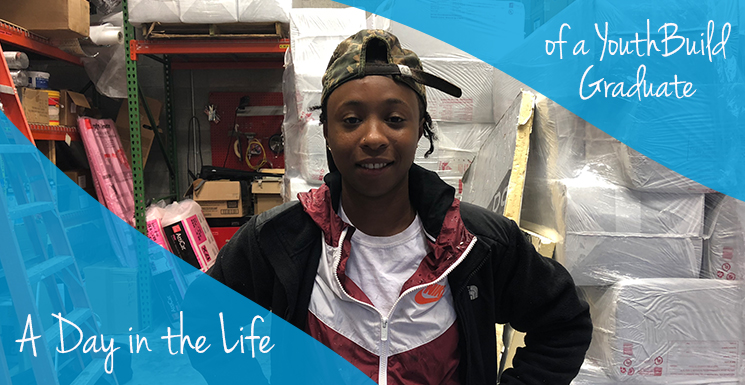 Angiela arrives at the Urban Training Center on Fifth Ave by 7:30. She lives in North Central Troy and takes a quick bus ride to work every morning. Once at work, Angiela meets up with the rest of the weatherization work crew as they head out to the garage and load up the supplies for the day.  What they need depends on the work they’ll be doing that day, but today they add jammers, sweeps, caulk, plywood, and R board to the vans. They also grab light bulbs, CO and smoke detectors for every job.

The Weatherization Program at CEO makes energy improvements to a qualified home such as sealing air leaks and improving insulation. These improvements lead to energy savings for the homeowner.

Angiela is a recent graduate of CEO’s YouthBuild program, and started as a laborer in the Weatherization program a few months ago after graduating from YouthBuild in May. The YouthBuild staff sets up mock interviews for the members so they can work on the soft skills required to do well in a job interview. Angiela had her mock interview with the Weatherization department, and after talking over the job with the existing staff, she submitted her resume when the position remained open after she had graduated. The construction training that YouthBuild provides has been helpful to her, but there’s also been a lot of on-the-job training over the last few months.

The Weatherization crew leaves the Urban Training Center for the jobsite. The program service area extends throughout Rensselaer and Washington counties, so there can be a longer commute to the job some days. Last week they were working on a house that was an hour and a half away, but this week they are working on a home on Spring Ave in Troy, so the commute is shorter. Once at the jobsite, the crew introduces themselves to the owner, and gets ready for the day. Sometimes if there’s a dog at the home, Angiela admits she makes sure to pet it once or twice too.  Angiela is one of three Weatherization Laborers, and there are two Crew Chiefs, Kevin and Tracy. Either Tracey or Kevin will go through the work scope and plan out the day. “Tracy likes to tackle the harder stuff first, save the easy stuff for later on,” Angiela says.

Angiela usually helps with the jammers and sweeps to start with. Sweeps are located under a door, and jammers are fitted around the door. These two areas can potentially have a lot of air leakage, so improving the seal around a door can help with overall weatherproofing. She gets to work doing the front door, back door, and basement door, then weatherstrips the attic hatch. Kevin & Angiela head up to the attic and get it ready to be insulated. Attics that are not properly insulated can lead to a lot of energy loss for a homeowner. Once in the attic, they put in proper vents, and get everything ready for the installation of cellulose insulation throughout the attic. This particular house has two separate attics so making sure everything is properly prepped prior to blowing in the insulation is time consuming. They’ll do the actual insulating tomorrow. It’s lunchtime for the whole crew. The crew usually eats together, and they seek out something quick depending on where they are. Angiela says her favorite is Taco Dog in Hudson Falls. Since they’re in Troy, they head over to Famous Lunch in their two vans. Angiela usually rides with Tracy. Tracy was her construction teacher in the YouthBuild program, and transitioned over to Weatherization shortly before Angiela joined the program. So the two have been working together for quite a while, and Angiela says she considers Tracy a mentor, “I’ve learned so much from him.”

After lunch the team transitions to working on the basement. They start by focusing on sealing penetration spots (anywhere that air is getting in and out). They work on sealing off the area around the dryer vent first. Angiela pitches in wherever she is needed.

After working on the penetration spots, they focus on the bays of the house. There are cracks in the bays which can let air seep into the main area of the house. To seal those cracks, the crew puts up half inch R Board in the bays and then sprays, 2 Part Foam insulation to seal off the area.  “I like the more the physical work,” Angiela says, “I’m excited to get into a union, and this job is helping me build my knowledge in construction and build up a resume that will help me out long term.”

Angiela notices some older CO and smoke detectors throughout the house and replaces them with the new ones that they brought. Typically they are needed in the kitchen, basement, and second floor. She also helps swap out regular light bulbs with LED light bulbs which are more energy efficient. The EmPower NY grant covers these upgrades for qualifying homes, since they make the home more energy efficient.

Back in the basement, Angiela helps to seal a hole in the concrete near the drain pipe. This is another area that can lose air, so she mixes up the concrete and pours it into the hole to help seal it and prevent air loss. She also kills a spider while down there.

Angiela and the rest of the crew start cleaning up for the day. They pick up the tools, and supplies and inventory everything to make sure they don’t leave anything behind (especially if it’s their last day on a job). Then they sweep and vacuum to make everything tidy, before heading back to CEO. The crew parks the vans and unloads a few things in the garage. They throw out the garbage from that day’s work, and replenish any supplies they may need for tomorrow’s worksite before heading home.

What do you like most about what you do?

“The people. I like meeting the people, going to their houses, and making everything better for them. They are so thankful for the work that we do. The elderly people are really nice, they always give me something to drink, and a few times I’ve even gotten a hug. The houses themselves are really neat too. Sometimes it’s interesting to just see them. I was in a beautiful trailer one week, a nice farmhouse in Cambridge the next week. The house we’re working on right now in Troy is really beautiful, it has two staircases! You feel good knowing that when it’s winter, all of these people are going to be warmer because of the work we do. I also really like the animals. There’s a really cute dog at the house we are working now.”

What would you want someone to know who is considering YouthBuild? “If you put your full potential to YouthBuild you will not regret it. The program offers you so many opportunities, but you have to reach out and grab them. The support system is great, and especially if you want to connect with the community that’s involved in construction they can really connect you. The teachers and peers help make it a really great program.

I found out about YouthBuild through a friend who had graduated from the program and is now working for a union. I graduated from Troy High in 2012, and after that I had a couple of jobs. I worked at Samaritan, and at Save a Lot, but nothing I really liked a lot, and no real direction. I found a lot of direction in YouthBuild. I liked the support they gave us, and the classes: the leadership classes, construction classes, math classes, etc. I also really got to know my peers, especially at mental toughness. That ropes course was really hard. I’m scared of heights, and when we had to walk across the tightropes, that trust piece was really difficult, but it helped to have people doing it with you.”

What would you want someone to know about working in the Weatherization program?

“It’s a great team, and they are willing to show you how to get things done and how to do things correctly. You can learn a lot on the job from every single person on the crew, and they are happy to show it to you.  Everyone is happy to pass along their knowledge to you.  And we eat pretty good too!”