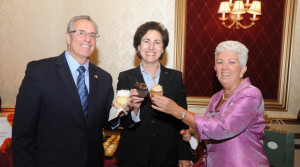 CEO’s “A Time for Tasting” a Success

TROY, NY –  OCTOBER 26, 2012 – The Commission on Economic Opportunity (CEO) held its annual charitable fundraiser to support the CEO Foundation, on Thursday, October 25th at the Franklin Terrace Ballroom in Troy. The CEO Foundation financially supports CEO’s many programs, which help local families- and individuals-in-need to rise out of poverty. Hundreds turned out to participate in silent and live auctions and to sample signature dishes from the area’s finest restaurants. “The event brought in $50,000 to support our Foundation” said CEO’s Executive Director Karen E. Gordon.  “We are grateful to our supporters and the Capital Region community for coming together in these very trying economic times to raise money and awareness for our organization. CEO makes such a difference in the community, and it is possible, in part, due to the funds raised at this wonderful event.” Eileen Bagnoli served as Honorary Chairperson for the fundraiser.

Guests were entertained with live music by Sonny and Perley while they perused the many silent auction items on display. The live auction to close the event featured opportunities for guests to take home a 43” Flat Screen TV, premium New York Jets Tickets, and a two night stay at Mirror Lake Inn, among other prizes.

This year’s event also marked the return of the much-anticipated cupcake competition, which offered two accolades this year: A People’s Choice Award and a Judge’s Choice award. This year’s official cupcake judges were Tim Drawbridge from WNYT Channel 13, Innae Park from YNN Albany, and Daniel Berman of Chef’s Consortium and FUSSYlittleBLOG. The Judge’s Choice Award went to Sweet Temptations of Albany, and The People’s choice award went to The Cookie Factory in Troy.