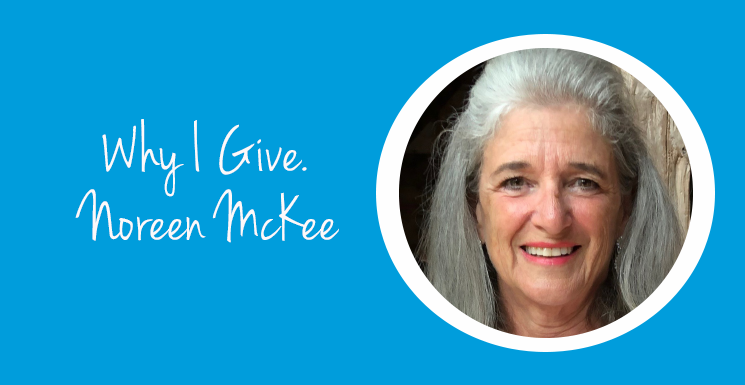 Why I Give | Noreen McKee

Noreen McKee is an active board member of Unity House in Troy, and a dedicated activist for voter reform in Rensselaer County. A resident of Downtown Troy, Noreen and her husband moved to the area from Brooklyn in 2012 to be closer to their son who was already in the area. Prior to settling in the Capital Region, Noreen first worked as a social worker after college graduation at Catholic Social Services in York PA. She was involved in the Vietnamese Refugee Resettlement, and was astounded by the generosity of the community stepping up to the plate with offers of jobs, apartments, food, and more.  After a few years she moved to Alaska, where she and her husband worked at a boarding school as part of the Jesuit Volunteer Corps. Noreen speaks fondly of both her early work as a social worker, and of her time in Alaska.

Steve McKee, Noreen’s late husband, was a journalist, author, and lifelong athlete. Steve, known for his sports column, The Daily Fix, in The Wall Street Journal, and eventual book, My Father’s Heart: A Son’s Journey (Da Capo Press, 2008), frequently wrote about his father’s fatal heart attack at 50, and how that inspired him to maintain a lifelong effort to avoid that fate through staying in shape and a healthy diet. Despite his dedication, Steve was diagnosed with heart disease in 2005, and passed away in 2014 from complications following surgery to repair a torn aorta. During their time together, Steve would say to Noreen, “We only live once, we have limited time, so we must make the most of it.” After Steve passed away, Noreen sought to create a foundation in his name.

As a community-minded resident of Troy, Noreen saw inequality throughout the city, and with Steve’s legacy in mind, she created the Stephen J. McKee Foundation. “Troy has so many needs, why not help with the little we have,” says Noreen.

As a Unity House Board Member, Noreen volunteers doing intake, and values the firsthand experience with the Troy residents Unity House serves. “Intake has been a huge eye-opener. I work Monday mornings typically, and people would come in during the winter underdressed, sometimes young girls in flip flops and no coat because they were avoiding abuse and sleeping in the park. Housing and homelessness are big problems in our city,” she says.

It was through a friend, Mark Fleming, that Noreen first became aware of CEO’s YouthBuild program. Noreen was looking for a program in the Troy area that was doing work with youth and job placement. Mark, a CEO Board Member, recommended CEO’s YouthBuild program, and Noreen met with Katherine Maciol, president of CEO, and the YouthBuild staff before determining it was a great fit. Noreen’s own son, Patrick, had struggled with traditional high school structure, and Steve and Noreen had tried several different boarding schools before finding one in Utah that fit his needs.

Conventional school programs don’t always work for each student, and YouthBuild offers an alternate path: a 34-week workforce development program that helps youth set and achieve employment and training goals and removes barriers to success through hands-on vocational learning, soft skill development, and preparation for the High School Equivalency exam (HSE). The program, which is fresh with new life after a recent partnership with the SEAT Center in Schenectady, aims to meet students where they are, and although some may drop out during the initial “mental toughness” phase, they are always welcome to reapply and join in a later cycle.

“It’s important that they can come back,” says Noreen, “it mattered for Patrick.” Her son Patrick, started at HVCC this fall and has been on the presidents list. At the age of 28, he may be a little older than his peers in the college program, but education does not have a deadline. The CEO YouthBuild program accepts members 16-24.

Get involved! Donate to CEO’s programs>>>